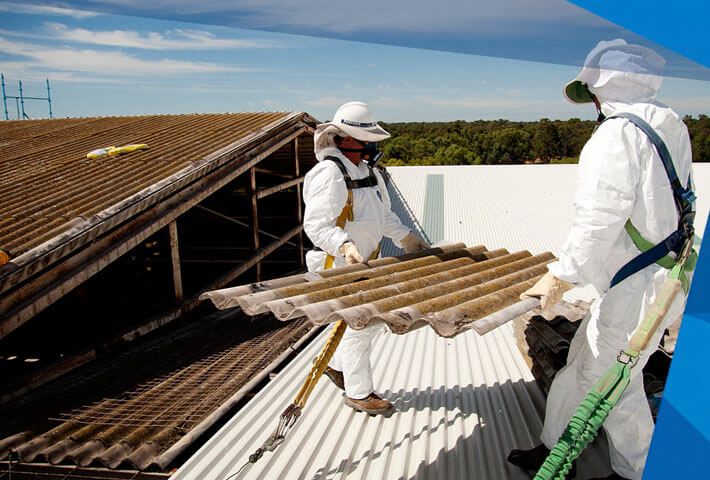 Asbestos is a naturally occurring rock forming mineral silicate in fibrous form belonging to the serpentine and amphibole groups. It occurs naturally in large deposits on every continent in the world. There are six types of naturally occurring asbestos fibres of which only three have been used commercially in Australia.

Asbestos has been used in the ancient world of the Egyptians, Greeks and Romans. It is believed that as early as 4000 BC, asbestos fibres were used for wicks in lamps and candles. Between 2000-3000 BC, embalmed bodies of Egyptian pharaohs were wrapped in asbestos cloth. The Greeks and Romans documented the harmful effects of asbestos fibres on those who mined the silken material from ancient stone quarries noting a “sickness of the lungs” in slaves who wove asbestos into cloth.

The commercial use of asbestos commenced in the late 1800s in Australia in four main industries including Mining and Milling; Building & Construction (for strengthening cement and plastics, for insulation, fireproofing and sound absorption); Ship Building (eg. insulation of boilers and steampipes) and the Automotive Industry (eg. vehicle brake shoes, gaskets and clutch pads).

There were over 3000 products (Asbestos Containing Materials or ACM) manufactured with asbestos fibres. The ACM fall into two broad categories: friable and non-friable (or bonded).

‘Friable’ is ACM that can be easily reduced to powder when crushed by hand, when dry. These materials can contain higher percentages of asbestos fibres and are easily or more likely to release airborne fibres into the environment with minimal disturbance. As such, they pose a greater risk to health. Friable materials must only be handled and removed by an asbestos removalist with Class A Asbestos Removal Licence. Examples of friable asbestos-containing materials include sprayed on fire retardants, insulation (eg. millboard, pipe insulation), sound proofing, the lining on some old domestic heaters, stoves and hot water systems and associated pipe lagging, the backing of sheet vinyl and linoleum floor coverings, thermal lagging, some vermiculite.

‘Non-friable’, or bonded ACM is used to refer to ACM in which the asbestos is firmly bound in the matrix of the material. These materials are unlikely to release measurable levels of airborne asbestos fibre into the environment if they are undisturbed. Therefore, they generally pose a lower risk to health. However, activities that may abrade the ACM such as drilling, grinding have the potential to release higher concentrations of airborne asbestos fibres into the environment. The non-friable ACM are mainly made up of asbestos fibres together with a bonding compound (such as cement), and typically contain up to 15 per cent asbestos. Non-friable ACM are solid, quite rigid and the asbestos fibres are tightly bound in the material. Non-friable ACM are the most common in domestic houses. They are commonly called ‘fibro’, ‘asbestos cement’ and ‘AC sheeting’. Examples of non-friable ACM include asbestos cement products (flat, profiled and corrugated sheeting used in walls, ceilings and roofs, moulded items such as downpipes) and vinyl floor tiles.

While asbestos is a hazardous material it can only pose a risk to health if the asbestos fibres become airborne in respirable size, are inhaled and lodge deep into the lungs (in the alveoli). Inhalation is the main route of entry to the body. Respirable fibres are fibres that are more likely to reach the small airways and alveolar region of the lung and are defined as having a length of more than five microns, and an aspect ratio (length/width) greater than 3:1.

Asbestos is classified according to the Globally Harmonised System of Classification and Labelling of Chemicals (GHS) as Carcinogenicity Category 1A (May cause cancer).

According to Australian Government Department of Health website, we are all exposed to low levels of asbestos in the air we breathe every day. Ambient or background air usually contains between 10 and 200 asbestos fibres in every 1000 litres (or cubic metre) of air (equivalent to 0.01 to 0.20 fibres per litre of air). However, most people do not become ill from this exposure, because the levels of asbestos present in the environment are very low. Most people are also exposed to higher levels of asbestos at some time in their lives; for example, in their workplace, community or home. However, for most people, this kind of infrequent exposure is also unlikely to result in any ill effects.

Safe Work Australia states that “the typical environmental background in outdoor air is 0.0005 fibres/ml and 0.0002 fibres/ml in indoor air. The daily inhalation volume for an average adult is 22 m3 or 22000 litres. This means 5500 fibres are breathed/day by the average person (proportion of time spent indoors = 20 hours/day). Despite this the general population does not contract asbestos related disease in significant numbers. The background rate of mesothelioma is less than one per million per year. By comparison, the annual death rate for a 40 year old male in 2008 was 1.6 per thousand or 1600 per million. However, there is no absolutely safe level of exposure to asbestos fibres.

Most people who develop asbestos related diseases were workers who have worked on jobs where they frequently breathed in large amounts of asbestos fibres. As an example, construction workers using unsafe practices in the past may have frequently encountered asbestos fibre levels significantly higher than those levels found in the background. The current workplace exposure standard (time weighted average (TWA) over an eight-hour period) is 0.1 fibres/millilitre of air (100 fibres per litre which is between 500 and 10,000 times the background levels). In the past, workers in asbestos milling or mining often encountered fibre concentrations a million times higher than background levels. In 2011, 606 deaths were caused by mesothelioma and 125 deaths were caused by asbestosis in Australia.

Family members of exposed workers or those who lived close to active asbestos mines in the past are also at risk. A worker exposed to asbestos fibres or a home renovator can carry asbestos fibres on their clothing, boots, skin, hair and tools. Everyone should be alert to ensure they do not become exposed to these fibres.

A very small number of asbestos-related disease cases occur each year in people who have not worked with asbestos products. The low number of cases makes it difficult to determine the exact cause of the disease or the likely exposure event, but unsafe handling of asbestos materials in the home may have contributed to some of these cases.

If you require assistance in asbestos inspection, asbestos testing or asbestos assessment contact SESA on 02 9822 8406.