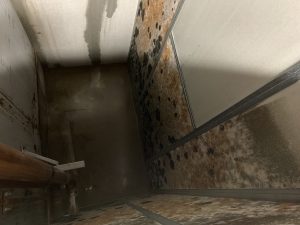 The investigation of mould contamination in the indoor environments may include the collection of air samples for direct microscopy examination for fungi (non-viable), air samples for fungal cultures (viable), or both. A sampling plan is required before collecting the samples with clear goals, purpose and relevance of the sampling to answer questions for the investigation and to support field observations. Results are used to evaluate conditions of the building rather than evaluating health risks, although excessive levels identified for certain mould may be used as indicative of potential health risks for occupants and specifically for mould sensitive individuals.

The use of direct microscopy examination air sampling results are generally used to ascertaining whether the two environments from which samples have been collected are different regarding fungal spore presence and thus pointing to a problem within an area of the building.
The approach for sampling typically involve collecting and comparing indoor versus outdoor samples. Based on on-site environmental conditions, the assessor is usually trying to determine whether any significantly elevated fungal levels are occurring indoors
that are different or unusual when compared with the outdoor microbial flora. Investigations also compare levels of fungi in complaint/concern versus non-complaint/non-concern areas in the indoor environment.

When analysing direct examination samples, fungi are identified using microscopical techniques to examine spores, hyphae (long, branching filamentous structure of a fungus) and other fungal structures captured by the air sampling cassette. Fungi may be identified to the genus level by this method. Although spore trap sampling for direct examination is not recommended in investigations that involve infectious fungal agents (because fungal culture/species identification would be required), such sampling and analysis can be used in evaluating levels of specific airborne allergens (e.g., fungal spores, fungal hyphae, pollen grains).

Variables that could affect the sampling include conditions indoors and outdoors prior to and during the sampling. These may include:

The following procedure may be referred to as a guide for sampling airborne mould:

This procedure aims to provide consistent methodology for sampling fungal structures (spores and fungal hyphae) on surfaces for the identification of mould genera by direct microscopic examination. 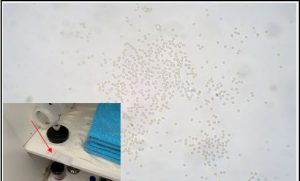 Tape sampling is the most common technique used to test surfaces for mould during a mould inspection. It provides valuable information. The identification of the mould genera present, their occurrence in indoor environments and in water damaged buildings, the relative degree of contamination, and the potential for airborne spore production may all be determined by tape sampling.

The method can be performed using either standard, clear cellophane tape or a packaged kit specifically designed for mould sampling such as Zefon Biotape or Fungi Tape. The tape lift method can also be applied to sample bulk materials contaminated with mould sent to the laboratory and to swabs used to sample mould from surfaces. The sampling involves direct contact to visible mould (IICRC Condition 3) or non-visible dispersed mould (IICRC Condition 2) to evaluate surface contamination and assist in planning for remediation.

Tape sampling is used for qualitative rather than quantitative analysis. Tape sampling can aid in the identification of mould, but cannot accurately determine the scope and severity of the mould problem that requires visual evaluation by the mould inspector or assessor.

The tape or a slide prepared with adhesive is pressed against the sampled surface in order to collect the sample, which is then sent to a laboratory for analysis. This method is non-invasive and will not damage materials or surfaces, when performed properly. Depending on the material, tape samples can be obtained from the surfaces of valuable furnishings and materials of historical provenance that have visible fungal growth, usually without risk of damage.

The Bio-Tape™ system is one of the most popular tape sampling and collection products on the market. It consists of a flexible, plastic microscope slide with an adhesive area. The slides come packed in their own individual mailers and are provided with unique serial numbers for traceability and documentation. A center-line marker on the slide aids the user in locating the center when taking the sample and also aids the laboratory analyst in finding the center of the sample. The Bio-Tape is compatible with both optical microscope and scanning electron microscopy (SEM).

For Assistance with Your Mould Sampling Contact Our Friendly Team

Would You Like to Know More About Our Services?

Call us today on 02 9822 8406 , email us , or use our online enquiry form for further information about our services, to arrange an obligation-free phone consultation or to discuss your requirements with us.